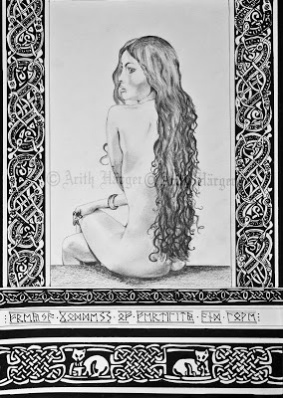 The goddess Freyja is one of the few Norse Deities i haven’t talked about much, which is amajor flaw from my part because she is a very importante goddess, and she is more than just what people are used to hear about her, the goddess of Love, Beauty and Fertility.
Freyja is the current female ruler of the Vanir tribe of gods and all of Vanaheim, along with her brother Freyr, the lord of both Vanaheim and Alfheim. It is true that Freyja was once married with her own brother Freyr, the union of the two deities of fertility, together they ruled not only over the land and its fertility which is a major need to the Vanir gods for they are bound to the very earth and work hard in agriculture, but also with the fertility of all living creatures. After the war ended with the Aesir agaisnt the Vanir, Freyja, Freyr and their father Njörd, were fostered to the Aesir as hostages in Exchange for Honir and Mimir that went to the Vanir side, an agreement of peace between the two tribes, after this a new law was established by the Aesir gods, that the marriage between siblings would come to an end, and so to Freyja and Freyr new marriages were arranged. She was married with the god Odr to whom she bore two daughters, Hnoss and Gersemi.

As it is often heard, she is indeed the goddess of love, beauty and fertility. Love and beauty are often linked, for love is the primary force, the greatest feeling in which we can see beauty in the things, or people, or animals we love, she often shows people the worth of love and how it is crucial to achieve it, and she encourages people to also love themselves the way they are, but not just sticking to that, because some people don’t like the way they are and start giving up and with time they will not love themselves, they will just get used to what they are and forget about the rest, and being used to something or someone, isn’t love, love is about caring, taking care, is about the deepest feeling for someone but without forgeting ourselves, and loving ourselves isn’t getting used to the way we look, is about taking care of ourselves, doing exercise, eating healthy, and it isn’t agaisnt nature to put a bit of color in you, beautiful clothing, makeup, jewelry, to enhance your beauty, that is something that we human being do for at least 36.000 years.

Freyja is often called to help with fertility problems, and she does when it comes to us human beings, but she is more turned to the fertility and fecundity of animals and the land especially. However she helps with the fertility of us humans that are in need and ask her that, she is closely connected with all female aspects, be that human or animal.

Freyja is also associated with magic and the old spirituality of the Norse people, Seiðr, we can see this association because she owns a cloak made of falcon feathers which allows the wearer to fly in the form of a falcon, this shows her connection with shape-shifting magic, the kind of power a shaman uses while in trance, animal forms to better adapt to whatever environment, landscape or weather when travelling in the spiritual world. She also has a connection with Horses, she has a title which is “Mare of the Vanir” connecting her to the horses but also emphasizing her role as a fertility goddess.

This goddess is also associated with war and death, such as Odin whose Valkyries/Valkyrjas choose the slain from a battle and carrie them to Valhalla, Freyja keeps half of the slain in her own Halls called Sessrumnir in Folkvangr.

Neo-Pagans nowadays who follow the Norse culture and beliefs like to call themselves Asatru while not knowing the full meaning of the word, Asa comes from the norse word áss which is the word for god and aesir for plural, but the word is associated with the Aesir gods only and Trú means faith or religion in the old Norse, so basically this is the worship of the Aesir gods, not including the Vanir or the deities of the underworld and other beings, and often these Neo-Pagans talk about Seiðr, the magic, spiritual and shamanic arts of the Norse people, but Seiðr is an exclusive art that comes from the Vanir gods and Freyja is the goddess more connected to that and she is the one who teaches that to people and to the other gods, so when people want to practice Seiðr, they are forced to worshiped Freyja and the other Vanir gods, of course that people can only worship those and call themselves Vanatrú, but in my point of view and personal experiences with the Norse deities and spirits, and with shamanic practices, all deities are equally importante, there isn’t the existance of a good god or and evil god, all of them have their own skills, area of expertise, flaws, good aspects, and so on, with very human emotions and behaviours, there isn’t perfection, there is the importance of being balanced between all things and express ourselves through our honorable acts.

Note: The artwork to illustrate this post is a drawing of Freyja made by me. If you have any questions for me or if you want to see my artistic works, check out my Facebook page and make a Like if you can by following this link –> http://www.facebook.com/ArithHarger