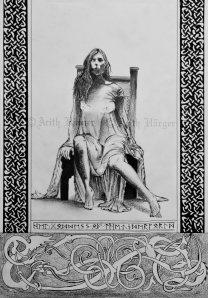 Making the knotworks in the work gave me an huge pain in the right hand, back and neck problems for a week due to the constant circling movements when making a knotwork hehe.

Hel/Hela is the Norse goddess of the underworld and of death, residing Helheim. People tend to think of her as an evil and terrifying deity, but she is a very powerful goddess whose work is of great importance, she doesn’t just takes care of the souls of the dead, but also helps those in suffering from depression or some sort of trauma that holds people and doesn’t let them live. She usually appears as hald beautiful and half rotten, a test to your mind if you are able to accept those with some deformity, for we tend to put aside people like that, away from our social space and tend to hid them, when all we have to do is accept them and love them the way they are and treat them with respect. Hel also appears as a perfectly beautiful woman, welcoming the dead into their new homes. When christianity came to Europe, Hel and Helheim was seen as a place of great misery and sorrow, and thus the Christian Hell took form, but in truth, it is one of the most beautiful places of the Nine worlds from the Norse cosmology, filled with gardens, cosy wooden and stone houses, orchards, and vast forests where it is always autumn.

In this drawing i didn’t want to make Hel as it is often seen or talked about, i wanted to gave her a normal look of a woman, but with the light coming from above and make a shadow on her face to look like a skull, to give her that mysterious appearance.

Freyja is the Norse Goddess of love, spirituality, fertility of both land and living beings and she is also associated with death. She is the daughter of the sea god Njörd and her brother is the god Freyr. Her Halls are placed in Fólkvangr where half of those who die in battle come to join her in her realms in the Halls of Sessrúmnir, while the other half goes to Valhalla. The knotworks below have two cats because her chariot is pulled by two of those animals.

If you like my works, please come and visit me at https://www.facebook.com/ArithHarger and check my other artistic works. Make a like, will you? hehe