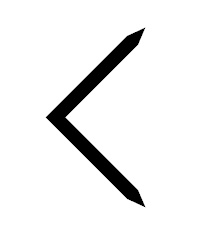 “Cen is known to all by its pale bright flame, it always burns where princes sit within..”

Kaunaz or Ken is the rune of creativity, a light source,inspiration, hope and passion, Kaunaz is the flame of a torch cut from the branch of a pine tree. Its wan light keeps the darkness at bay and allows the sentinel to protect his charges from harm. The torch has other assossiations, too: it can symbolise learning, and especially the knowledge handed on from generation to generation, which is why the words Kaunaz and Ken are related to our words “kin” or “kindred”.
The symbolism of the flame can additionally be applied to passion, without which further generations would not exist. On the other hand, the word Kaun also resembles the Norse word for “wasting” or “ulcer”, possibly because, when maintaining a flame, the kindling that provides its fuel is eventually consumed.

The most obvious meaning meaning of the rune is the gaining and passing on of knowledge. However, we should not forget its connection with passion, which can be felt in both a physical and a mental sense. One may be passionate about a subject or a person, for exemple, and when this rune appears in a reading, the two concepts are often strangely mixed together, just as the ancient Anglo-Saxon verb “kennen” meant both “to conceive” and “to bring forth from the mind”. In more mundane terms, Kaunaz can mean the start of a consuming love affair and the spark of a meaningful relationship that may teach both parties a thing or two about life. This is one of the most positive runes, leading you on a path of new discovery. It is also an indicator of safety, because in some mystical sense you are being watched over as thoroughly as if Heimdalll or the vigilant owl were guarding you from danger. A sudden. powerful insight is also likely when Kaunaz is prominent, and you may feel touched by a clarity of vision that you have never known before.

A loss of love, friendship and old loyalties are foretold when Kaunaz appears in the inverted position.. You may feel yourself to be adrift, abandoned and with little idea of what to do next. However, Kaunaz is primarily associated with learning, so it is important to remember taht some lessons are hard ones. It may be taht it is time to let go of the past and to move on. All will be revealed in time, so don’t panic. The lessons that you need to learn will become evident to you and you will soon find the right path, even if the guiding light of Kaunaz seems dimmed at the moment.